We had some issues with slow loading pages, some are now resolved with the migration to TaskBlast.com where we are using a better platform based on Microsoft Azure.  However, we are still working on backend impovements to speed things even more. The first load of a view might be a bit slower but after that, you should see a good improvement. We are not stopping there and have several more upgrades coming that should increase speed even further.

Time tracking was recently added but there will be major improvements coming over the next weeks.

The time tracking widget was added in a previous release to allow you to see the active timer from any view and quickly switch to another task. However, we will improve this widget to give you more visual feedback while it is active. 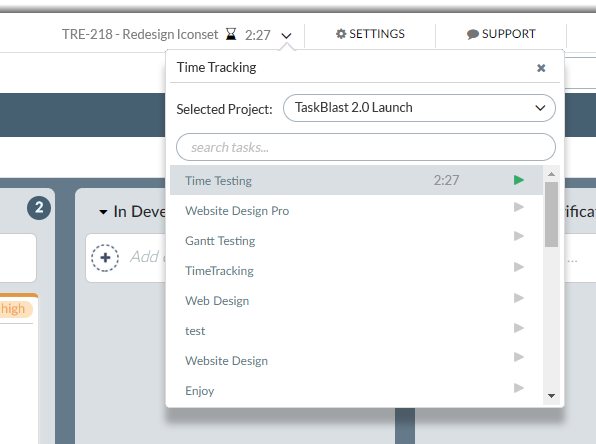 This will also get some love with more filters, remember and save filters along with support for multiple project filtering. You will also have more control over who see’s specific data and not only for clocked time but also for time estimations that are usefull for Sprint or Project planning.

Things have been moving so fast that we have struggled to keep the documentation updated, expect a much-improved FAQ, video and help system over the coming weeks.

This is one of our favorite improvements to TaskBlast.  It will allow you to take TaskBlast on the go to update tasks, add pictures taken from your mobile straight to Task description or to Task Comments.  This will be very usefull for projects that captures information on the field, or simply to let you update your progress while getting back home.

The Mobile version will also be helpfull for stand-up meetings where you have no computer around, so the team can use the phone or tablet to follow things up.

Gantt is another new feature we added recently. We are continuing to improve it and here are some of the planned improvements:

Whether you use Jira to manage your projects, want to migrate them to TaskBlast or want to work them in parallel on both systems, we want to include an integration with Jira in both ways: Jira-TaskBlast and TaskBlast-Jira, so you can choose the form more suitable to work your projects.

Projects handle a large amount of documentation, and having it in a single place that is easy to access to all team members is important for collaboration.  We plan to integrate TaskBlast projects with Cloud Storage Services such as Dropbox, Google Drive, Box, OneDrive, etc.

One of the biggest new features we would likt to add in the Gantt is Resource Management. You will now be able to see your staff availability by hours or task. Here is a sneak preview: 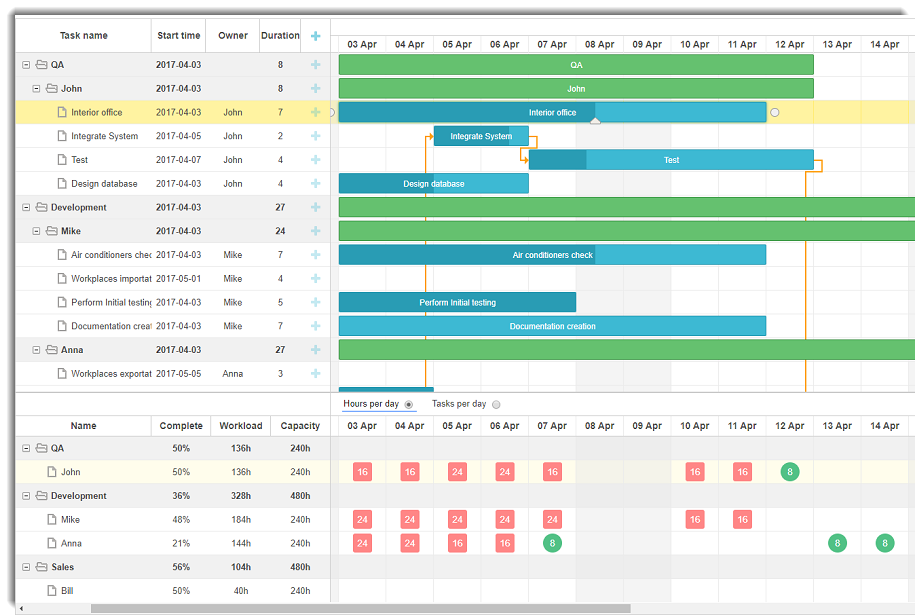 We will also show you some resource management data directly on the Kanban when you are assigning tasks so you can make sure the workload is distributed more evenly. 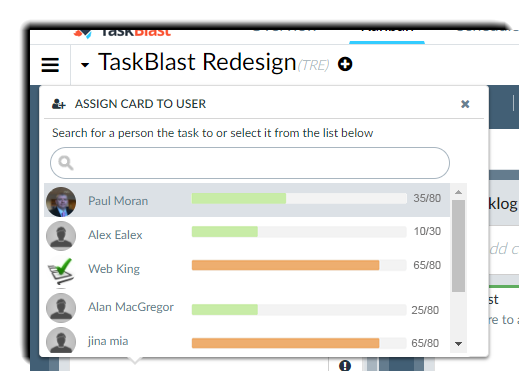 Some Developers prefer working in Dark Mode when programming so we would like to include this option for TaskBlast.  We also want to include support for skins to have a more personalized experience when using TaskBlast.

You can already set some basic roles and permissions in the time tracking tab:

However, we plan to expand those permissions quite a bit. Here is a recap of the new permissions: 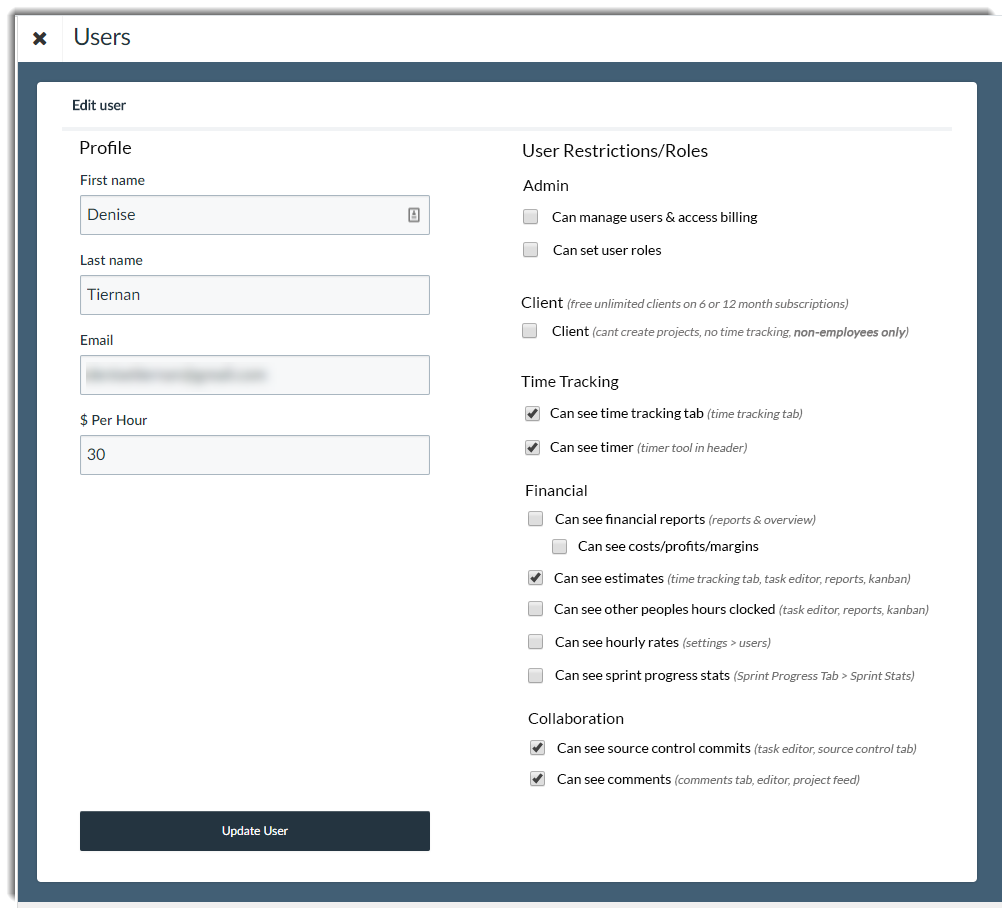 AI Bots seem to be everywhere these days. We weren’t just jumping on the wagon by creating another one. We wanted to solve a very real problem. When we talked to Project Managers we found out that the average time spent using project management software on a daily basis was 2-3 hours. When we investigated further the vast majority of that time was spent on 2 areas:

The high-level project overview will drastically reduce the amount of time it takes to give someone a status update on several projects. Updating tasks and following up on issues was really seen as a core duty of a project manager’s day. However, a lot of it can be automated.

One of the most important things that a Project Manager needs to do is stay on top of tasks. As tasks approach their due date, we need to know if they are still on track, and if not, what can we do to help get it back on track. We need to know the status of overdue tasks, blockers, why nobody has picked up unassigned issues etc.

What TaskBlast’s automated assistant will do is it analyzes those issues and automatically contacts the users assigned to the issues and asks for a status update. Let’s take a few examples:

Approaching due date – TaskBlast sends a comment to everyone assigned to the issue 2 days in advance of the due date to ask if everything is on track and if there is anything that might hold it up. This makes you proactive by addressing issues before they become a problem instead of after the bottleneck has already occurred. This type of proactive reach out can make a significant difference to your deadlines.

Another example – tasks with no assigned user. TaskBlast will look for the users with the least tasks on their plate and display a list of unassigned issues and see if they can take any which are suitable. This reduces the time spent following up with various people to see if they can take on a task and unassigned issues will never move so addressing this could again potentially have a very positive effect on your deadlines while also freeing up valuable time for you to work on other important tasks.

Overlooked issues. Issues that have sat in a lane for more than a few days without any updates. TaskBlast’s assistant would bump any of the assigned users and ask them for an update on why the issue has not been updated in x days. Once again, we are being proactive and addressing issues before they become an issue all while the project manager is off working on the things that really matter and not spending time on tedious tasks.

We are adding two new slack improvements we hope you will like.

Zapier is a tool that greatly facilitates the integration between cloud services. We want to make it easier for you to integrate TaskBlast with other services in the cloud by integrating it with Zapier.

There are a wide variety of services for personnel and Freelancers management like HubStaff, Harvest, Toggl, Freelancer, UpWork. With TaskBlast you can manage the time and cost information associated with the tasks on your projects.

Integration with personnel management services will allow you to cross-control information, as well as record cost information to generate invoices and payments through these services.

The concept is simple, identify what issues slowed you down during the Sprint/Release and put a plan in place to prevent it from happening again. This introduces a continuous cycle of improvement and increases the velocity of the team. The problem is with a large sprint it can take time to review each issue individually to see if there was anything that stood out about that particular issue.

What TaskBlast does is check the logic for what should flag an issue for discussion and display it in a view like which again reduces the work of the Project Manager or Scrum Master. On the left is the list of flagged issues and on the right is a list of bullet points of actions to implement in future to prevent a similar issue from occurring.  You can open an issue directly from this view to get more information.

TaskBlast will provide a pre-configured list of triggers that flag an issue as a potential issue for discussion.  However, you can adjust the triggers to decide yourself what the triggers should be. This gives you much more control over the number and types of issues shown.

The Team View is for managing stand-up meetings but also can be used to get an overview of progress for individual team members.

On the left, you see basic stats on how many tasks the user has completed in the selected period. If you select a user then the right side will display information about that user. They can talk about what they have done since the last meeting, what they plan to do today and what obstacles are in the way of them making progress.

It also will sync with your favorite GIT tools, such as GitHub and BitBucket, and extract any recent check-ins as well as displaying what issues you worked on in TaskBlast also. This allows the user to quickly refresh their memory on what they recently worked on and can then fill in the stand-up meeting info based on this. 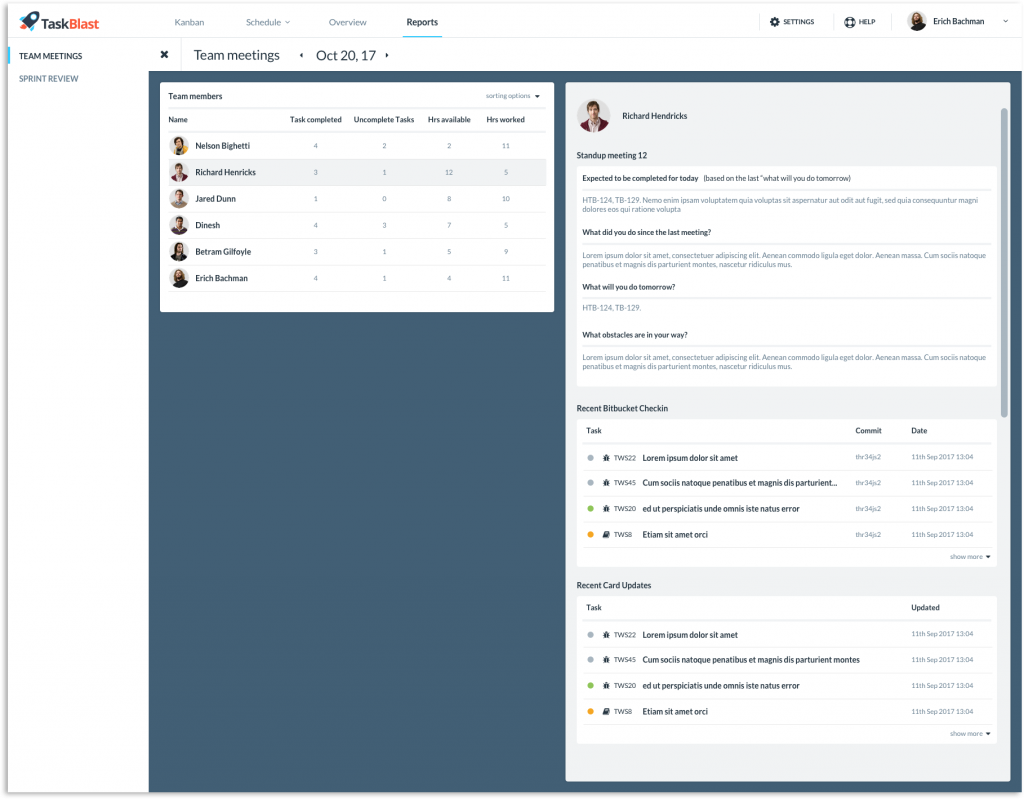 TaskBlast is a SaaS based project management solution. Its streamlined user experience and focus on only the features that matter enables rapid adoption & facilitates real-time visibility and on time delivery of projects.

This site uses Akismet to reduce spam. Learn how your comment data is processed.